If you follow me on the snapchat thingy (that crap

is really beginning to piss me off with their 24

…you’ve see me head over the mountains to do a
“family reunion” my family – pig pick’n this weekend.
However, I did make some horrible mistakes.
I wouldn’t share these with just anyone, so please keep
my failures private.
As in, YOUR EARS ONLY.
I arrived at the butcher to pick up the pig.
Little did I know that I should have specified that
the pig be ONLY cleaned and not split down the middle.
Yup, they split my pig down the spine.
The reason… most folks doing a pig roasting don’t
have the awesome PIG ROASTER PRO®.
These heathens put their pig “splayed” out on a pit or
bbq rack and cook and turn and cook and turn.
Not an efficient way but it will do in a pinch.
This is my first time using this butcher so I didn’t
even know I needed to ask or specify.

from top to bottom (one end to the other) for grilling. 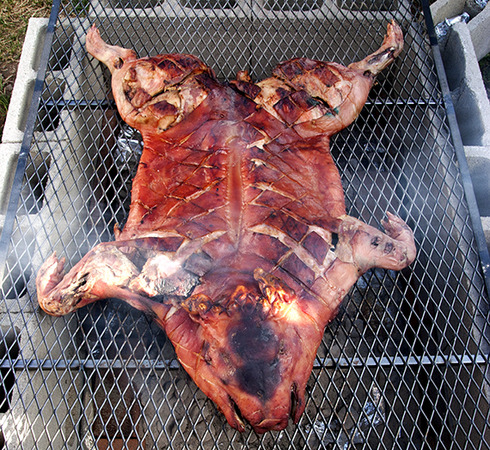 Doesn’t even look like a pig does it?
This wasn’t even the disappearing pig act.
I knew the 105# pig needed cooked about 5.5 hours.
I knew that internal temp on ham should read about
180 and I knew that by the time this fat piggy was
done, the middle would be overdone.
Well guess what?
Do to the split spine, (not to mention the extra work
to get it racked due to this) the pig cooked super
fast in the middle.
Literally the entire middle cooked and separated from
the bones and at about the 6 hour mark the entire
section…
FROM SHOULDERS TO HIPS…
DROPPED INTO THE BOTTOM OF THE ROASTER!!!
And before you ask, NOOOOOOOOO….
I did not take pictures of this car wreck. (pig wreck)
All that was left on the spit pole was the spine,
a few ribs and the bottom and top ends of the hog.
Talk about embarrassed. I was embarrassed!
I quickly put on my high temp gloves (see previous
email or click here) and I proceeded to lift the
middle up onto the carving rack which I’d set in place.
LESSON LEARN’T!
1:  make sure pig is only gutted not spine split
2:  cook too long and you’ll not have a good show
In hindsight, I wish I’d of taken a moment for a pic.
But at the time I was mad and embarrassed even
though this was all family.
I’m not kidding…
There was a head on one end. A butt on the other…
AND THE MIDDLE WAS GONE!!!
The pig was delicious and the pick’n was simple due
to how tender it was.
It was unbelievably good.
My excursion wasn’t without mistakes and that wasn’t
the end of it…
I flipped my pig roaster too.
More on that in a bit.
Ben “Disappearing Pig” Wilson
P.S.
The first real gig…
A yacht club from that $25 Facebook ad.
They don’t won’t the head on the pig.
I’m loving this Roasting Nomad Tribe stuff!