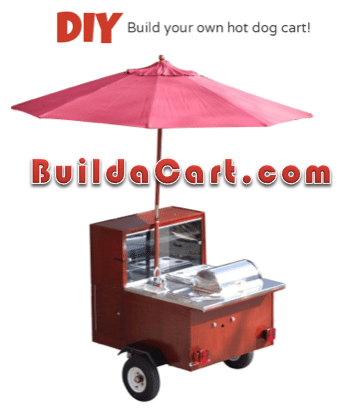 I hear daily from some amazing vendors, vendors that have done their due diligence, vendors who invested the time to educate themselves and arm themselves with as much knowledge as possible.  Without exception, it's these vendors who experience success, who do it quickly and are the ones who share their knowledge with us as they continue to succeed.

That's what they said when I told everyone I was going to sling some dogs.  I was told I was even crazier when I said I was going to build my own cart.  My wife, kids, brother, friends and others could not understand it.  I own a small print shop that had survived the recession and own another business that provides menus to restaurants in a five state area.  Why dogs?  I would just snicker and shoot off some goofy joke.
Months went by and I would work on my cart in the basement during my free time (which with 4 kids, two businesses and a wife is not much).  I set a deadline for a festival/concert the second weekend of August.  For some reason the movie “Field of Dreams” played over and over in my head and although I am not sure, I think I heard “….if you build it, they will come” a few times.  The project ran right up to my deadline with my cart being approved by the local Health Department a whole TWO days before the festival.
Festival Day arrives and I am as nervous as Bruce….I mean Caitlyn Jenner buying a jock strap.  What if after all of this, I sell 20 dogs?  What if something goes wrong?  What if the public does not like my dogs as much as family and friends?  I wonder if I can sell this cart quickly and recoup my money?  First customer….awesome.  That was easy….and fun.  Second…third…..fourth.  A little break….this is pretty awesome.  Then it hit.  It started with a line of maybe three people but kept growing and growing until an hour later I look up from my cart expecting to see no one and instead see a line of about 20 people.  Two hours later, still 20 people in line.  Am I that slow?  Not according to a lady who said our line was quicker than all the other “short lines”.  PROBLEM !!! I am about to run out of buns, dogs, slaw and drinks.  Ben said this may happen and I should just pack it up and call it a successful day…but look at that line !  I can't disappoint them!  Quick, son…..jump in your truck and go get more of this, that and everything like we talked about yesterday.  Three hours and ANOTHER trip to Walmart later and the 20 person line subsided.  In those four hours I served hundreds of dogs, met hundreds of new friends (some of who came back a second time to get more dogs), heard dozens of rave reviews of our dogs (many from people hollering at me as they passed the cart after eating)and was already asked by the festival organizer to come back next year.
The next week was filled with people commenting on how we “killed it” at the festival.  My wife, kids, brother, friends and other were amazed.  Then I let them in on the secret…….Why hotdogs?  Because hotdogs are the “gateway drug”.  I plan to do this part time while my kids are still semi-young and want dad around then I am going to buy a food truck or stand in food trailer (know where I can get one ? ) to run full time and close down the print shop.  What is the corny saying about “…the journey of 1,000 miles begins with one step” ?  Now I know the festival was an up day but I am actually looking forward to some of the “down days” so I can talk and cut up with my customers more instead of being in such a rush.  I think that is what people like about a hot dog cart…..there is no hostess showing you to your seat, no waitress taking your order, no cook preparing your food, no server bringing it out.  It is just you, the slinger and a great dog.
So thanks, Ben.  I bought a book for a few bucks and got hundreds of dollars of information free from your website.  And to anyone thinking of doing this….stay focused, be confident and just smile when you hear “Hotdogs ?!?!? You must be CRAZY !!!”

You can see, we all face the same fears and “what ifs” but for many, armed with the knowledge, they have stories like this.  Great job Kevin!!!  Thank you for sharing.