What if a Competitor Calls the Health Department?

Hey, folks! This might be a vendor's nightmare… Being at an event, working hard and serving hot dogs, and having a competitor at the same event get upset and call in the health inspector. Well, it happens. What would you do? Here's a true report from one of our own professional hot dog vendors…

I have two events for the same weekend later this year. Instead of not doing one of them I am having someone else work the other event and I am renting a cart from a friend.

My friend's hot dog cart is attached to a vintage motorcycle. He purchased it from Hollywood, CA, it was a movie prop. Okay… He gets a lot of attention because of the motorcycle and it brings in sales or just guys wanting to chit chat. 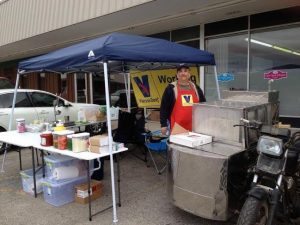 He was doing a festival and business was pretty good and a lot of gawkers at the bike standing around… Soooo, the BBQ trailer across the way from him got mad that he had so much attention, and the BBQ guy phoned the Health Department to come check my friend out. 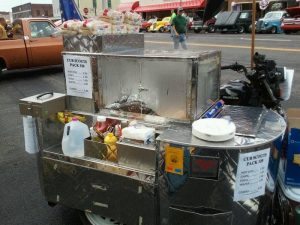 The inspector showed up and said he needed to check the cart and his credentials. Well, guess what — EVERYTHING was GREAT! So the inspector said he would be right back, and was polite with the inspection, etc. A bit later everyone noticed the BBQ guy shutting down, taking in his signs, etc.

Funny how that goes.

Yep. It just goes to show, if you do things right, keep it clean, treat people well, usually things work out in your favor.

Want to get started? Skip the long learning curve with the Instant Vendor course.

I have created a training wizard that can help you concur any part of the business you want. No matter the state you're in...no matter if you're brand new or have already gotten started.CLICK HERE TO SEE HOW THE WIZARD WILL HELP YOU [it won't hurt a bit]
Tweet
Pin
Share113
113 Shares