That dang alligator almost got away.
My dad was like a serial entrepreneur.  From the time I was young until I was about 15, dad had a hardware store, a huge blueberry farm, a catfish farm and was one of the largest beekeepers in the U.S. 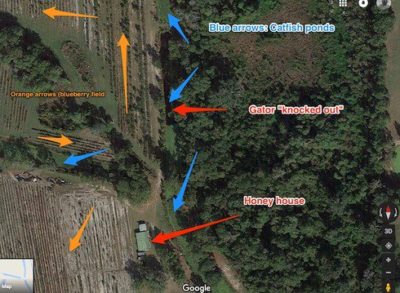 He used to say: “Ya put enough irons in the fire and eventually one will catch fire.” I think it may be genetic.

First thing I sold was rocks.  I was in 2nd grade, I believe.  But I'll tell ya about that later.

I was about 11.  We had 5 catfish ponds but only 4 that were operating.

Between the otters and the birds, it was a constant battle to see the fingerlings [read: baby catfish] made it to about 2 pounds.  (marketable weights)

One that could easily (and did) penetrate the fingerling cages and annihilate everything inside. We'd see him sun bathing or with his nostrils above the water line, but never did we have a gun handy.

One day.  My cousin Bill and I were riding on the back of the flatbed Ford truck (small bee truck) over to the honey house. Dad was driving.  The white sand dirt road went right up next to the ponds.

He points out the window for us to see the gator on the bank enjoying the sun. He hands a 12 gauge shotgun from the window to where we were on the flatbed. I lie down, carefully aiming.

I was shaking like a pine tree in a Florida hurricane. My nerves wouldn't stop.

Dad stepped out and in an instant took the gun and…

That punkin' ball “slug” hit that gator and he rolled into the water. Thrashing around, …the water turned red around him. Dad yelled:

What the….? Bill and I run around to the other side of the pond. Debating how to get him out without loosing an arm. The gator is mostly still and out of no where… dad jumps in. (yes… with the gator) and grabs him before he could sink.

He was about 5 or 6 foot long but at the time he looked to be 40 foot. Dad said, “boys, take that gator and bring him up to the honey house.”

About 200 yards away we walked carrying that gator.  I had the head resting on my shoulder and Bill was about midway down holding up the middle. We were proud.  Still nervous but proud. We'd just got a gator, almost completely by ourselves.

We got up to the honey house and maneuvered that big azz gator onto the back of dad's flatbed. We walked into the honey house where dad had a few guys working processing honey. Our chests poked out so far we couldn't see our own feet.

The machines were turned off and Dad led them out to the back of the truck. But there was NO GATOR!

Down the road, back towards the farm, that gator is just book'n it. He's running like a scalded hog. Dad grabs the pistol from under the bench seat and starts running after him with us close behind.

Dad, he wasn't scared of nothing and now his hero meter was through the roof. That one experience is what I can say made me not every give a #&^%!

I don't care about failing, I don't care how many times I fail… I simply don't care. Sure I want success, but the fear of failure isn't going to stop me from moving ahead.

My youngest daughter.  She's been inspired by what the Roasting Nomad Tribe members have been doing.

She, just 18, asked if I'd help her get started. Because of my dad, that gator and the many successes and failures since then.  I said, LET'S DO THIS!   This week Kalei gets her Pig Roaster Pro!  We are excited.

Starting from scratch at only 18 years old, she's going to be the only pig roaster here.

I'm requiring her watch the videos in the Tribe site, I'm having her do it all and I'll be emailing updates, step by step throughout her journey inside the Tribe membership area.

And if she follows the training that Jason and I have inside, she'll be… (not might be)… she will be successful!  Period!

Although I haven't had her tote a gator playing possum 200 yards on her shoulders, I think this will be a valuable lesson.

Kalei finished 2 years of college and high school at 16 and she's already one tough cookie. She's having to pay payments and it will be up to her now if she chooses to fail or succeed. The great thing is.  If I gave her anything (other than good looks) …she is not scared to fail.

“Alright then!  I ain't worried”

What's stopping you?  Is it fear that gator may still be alive?

Is it the fear of failure?

Could you be growing, exploding?

Could you be working less and making more?

I'll put money on it!

Most of us hate risk.

Most of us will play it safe.

Not me!  Probably not you!

Hellfire!  If you were risk averse you wouldn't even dream about being self employed.

We.  You and I.  We are special creatures.

We are awesomeness incarnate.

We are what makes the world spin.

Don't let your future successes be manipulated by current fears.

Simple but 100% accurate answer… Failure only comes from not trying.  Failure is never getting back up.

I've never seen anything as easy to start and make a real good living!

Nothing ventured.. nothing gained.

I owe it to my dad for giving me that “I don't give a crap” attitude and tenacity to always be moving forward.

What experience – gave you that?

Learn about the Pig Roaster Pro®  and the