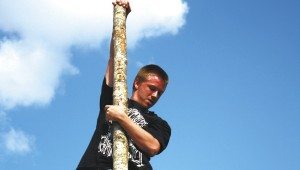 The pole was as slick as snot. Greased
from top to bottom with this white
gooey lard.

At the bottom of the pole was a big pile
of hay and at the top was a crisp twenty
dollar bill.

Everyone was lining up to take their
one shot at climbing that greasy, greasy
pole.

My dad came to the front of the line where
I stood 4th in line for my opportunity
to get rich!

He pulled me out of line and took me to
the side and said, “Son, you see all
these kids lining up…” I interrupted
and made him aware that he'd just
taken me out of my spot and now I'd be
forced to stand at the back of the line.

“Let these other kids get some
of that grease off, let them go ahead
and you will stand a better chance of
making it to the top.”

I remember thinking, this guy is brilliant.

I smiled at each kid as I proudly walked
to the end of the line, as if they were
my little pawns in this diabolic plan.

The crowd would roar with laughter at each
failed attempt.

I began to get nervous. What if I failed,
they would laugh at me too. Each child
made it higher than the first and each
child took a little more lard off the pole
while adding lard to their clothes.

I was almost giddy with excitement, but the
fear of failure and disappointment was
overwhelming.

I got out of line and walked over to my dad
who was standing nearby. He encouraged me
to go back and told me to grab some dirt
and smear it all over my hands before I
made my attempt.

He said this would help me get a better
grip. With much hesitation I walked
back over and regained my position at
the back of the line.

Secretly I hoped that someone ahead of
me would take the prize. No longer did
my desire for all the things that $20
could buy cover my fear of failure and
ultimate ridicule from the crowd I'd
receive.

I shared the hands in dirt trick
with the girl ahead of me in hopes she
would be able to achieve what none of
the ones before us had.

She almost made it. Near the top, she
met a part of the pole that was untouched,
it was still slathered in greasey lard.

She slid back down in disappointment.

I was almost in tears at this point. I
was horrified that I'd be the next child
to entertain the crowd and being last, I
now had every eye on me – or so it seemed.

I looked back towards Dad, and he smiled
and gave me a thumbs up. I bent down,
gathered some dirt in my hands and ground
it into my skin.

Up the pole I went. All I could see was
that twenty dollar bill. It looked to
be a mile away.

The first half was a breeze, there was
little if any grease left.

Upon arrival where my new friend had met
the untouched grease, I reached up with one
hand. It was covered in lard now and
almost useless to me.

I gripped ever tighter the pole with my
legs and wiped my hand on my britches.

Two more wipes and I switched hands. I
was now ready. I reached up to the spot
where I had cleaned and took hold.

I pulled myself up. It worked!

I was now within reach. I was giggling
uncontrollably as I snagged that 20 bucks.

I slid down like a proud fireman and ran
over to my dad.

The crowd was clapping and cheering, and
I felt like I'd won a million dollars.

I remember it all because it made an
impact on my life. I forever would
understand that the rewards in life were
far greater than the fear of disappointment. 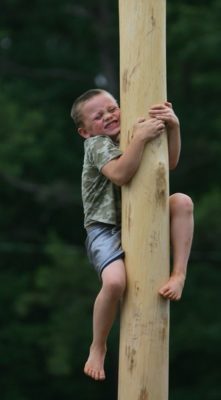 Disappointment is inevitable, it's potential
effects are there daily. We all fear it.

Often we are hesitant, often we make excuses,
often we avoid a win – all to prevent
disappointment.

I think the biggest disappointment in
life would be to look back and wonder,
“What if?”

“What if I
would have asked the school board about
vending at all the games?”

“What if I would have proudly stated what
I do for living?”

“What if I would have introduced myself
at that big party with all those big wigs?”

What have you missed out on?

Where would you be right now had you taken
every opportunity that the fear of failure
prevented you to try?

We all make decisions daily; some of these
we let fear rule. We allow the fear of
disappointment to prevent our attempt.

You get this one life. 200 years from now,
no one will look back and give two rat shits
about your failed attempts.

Hell, there probably won't be anyone alive
even speaking your name in 200 years. Unless,
of course, you become an infamous serial killer
or cure cancer.

So why not? Why not take advantage of every
single opportunity, every chance you get
to make this world a better place for you
and your family.

I was inspired to write this because I've
recently received 4 different emails from
folks who are scared.

They aren't scared of global warming or
deforestation or the ever evolving diseases
that threaten humanity – they all fear failure.

One gentleman who wrote me is a well known
business man in his town. He once was a
mortgage broker.

He sold the business just before the big
economic collapse.

He isn't set for life now, so he wrote me
after discovering some of my YouTube videos.

He was honest in expressing the reasons for
his hesitation of starting such a business
as hot dog vending.

“I'm not scared that I'll lose my ass, I'm
mostly worried about my friends if they see
me try this and fail.”

The fear of disappointing himself and others
may just prevent him from becoming a successful
vendor.

My answer: Who the hell is going to know 100
years from now?

Take every opportunity you have today, tomorrow
and from now on to fail.

Yes, I said “fail”. Because I know, failure
doesn't exist if you tried.

There are only two possible outcomes…

2. Experiences that mold you into a wiser, more
confident and successful person.

Either of which sound pretty damn good to me.

Proof: There are vendors right now that – no
matter the cart, no matter the circumstances –
could show up to whatever city or town,
find a location or venue and start making
money.

Let's say you have a hot dog business and it's
not doing that well. Do you think that if I
showed up, that I'd fail?

“Well, that's because you have all this knowledge,
you have already done it, you know more…?”

Maybe. But if you have access to everything
I know and everything other successful vendors
share on the LearnHotDogs.com blog and radio show,
then you aren't at a disadvantage, nor can
you claim one!

The only thing standing between you and your goals: