Share/Like to help others...
Unlike many of us, forced into this new venture of selling hot dogs, Michael K. sold his successful business and began his hot dog vending company to enjoy more free time.  He purchased a Big Dog and anxiously awaited the end to cold weather so that he could get his feet wet in his new venture.


“I created a huge hot dog sign that stood above the crowd and could be seen from everywhere In the park ( I will forward that in the next email) we had not finished setting up yet in the photo but I wanted a shot of the sign when It went up. At one point I walked to the edge of the area and looked back over the crowd towards the food booths and guess who's sign was visible from way over there? Could see none of the booths… Only my hot dog sign” 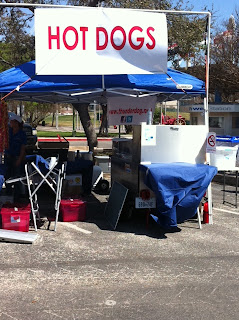 His first gig was to be a big event   !?&%#   His Big Dog cart slung in the middle of a sea of huge experienced enclosed trailer vendors was slightly intimidating.  No Worries!  Michael was prepared, doing as much homework as possible, he purchased a huge hot dog sign to hang over his cart and the necessary supplies.With much forethought and anticipation of huge success he even created a map for customers.  Here's what he said; “I split the line around the cart.. If they wanted a Chicago or chili dog they paid and went to the left of me where i had a table set up with Chicago condiments.. I knew this would take a little longer, but it got them out of line… Then if they were doing the self serve thing, they went to the right where the condiment tables were… Within seconds after ordering, they had the dog and were moving on…i will send you a copy of the site plan if you want..”What a brilliant move.  Had he not anticipated the large volumes of hot dog fans, it would of been a nightmare for he and his customers. 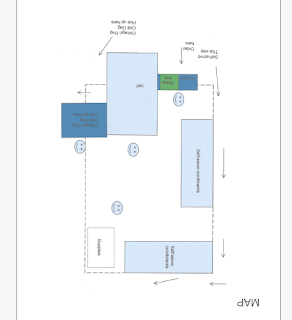 Here is a photo of his map sign directing customers, you can see it on the rear of the cart in the above photograph.

“We had very little wait time for the hot dog delivery.. So the line moved pretty fast.. Looking out and not seeing the end of the line for so long just blew me away.. We moved approx 2-250 an hour for at least 4 hours with no break..i think the longest time someone said they were in line was 15-20 minutes, and that was because of the length of the line… We had a blast!!!!!!!”

I must admit, I was not nearly as prepared as Michael at my first event.  This guy is awesome.  I have never ever heard of making a map for customers and the brilliance of directing them for faster service is pure genius.  This will help us all – Thank you Michael.

6 hours of slinging dogs, 6 gallons of chili later and thousands of dogs served with his team of 4… Michael had pulled off his first successful event.  With several thousand in revenue and the aching muscles to prove it he spent the next few days recouping.

Michael's son, a photographer was on hand and captured the action, I will be adding those pictures a little later.


“This whole thing was a very moving and humbling experience and I want you to know that I appreciate so much all the help you have been…
Just awesome….. “
( i only dropped 1 dog:-)
“With all the choices that were at this event ( 35 other food booths and trucks) we had a number of people that came back for a second dog rather than eat something else. (And stood in line again)  It is truly humbling. I have a lot to learn.”

After the event, the organizer told him he had the most customers.  No waiting, fast, inexpensive, delicious quality hot dogs – Michael outdid the large experience vendors.

Thank you again Michael for sharing your story and for inspiring us all.

“I can truly say that having access to all the info that you make available, helps a newby NOT make so many mistakes starting out. This event went off without a hitch and alot of it i owe to you. Thank you again for the time you took with me answering all my many questions. I will find a way to pay it forward ,and if there is anything I can ever do for you please let me know.” — Michael K. 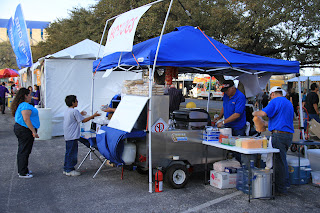 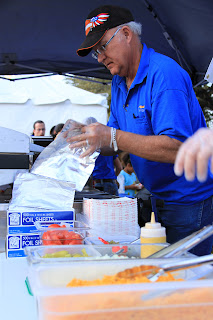 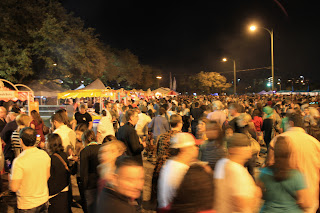 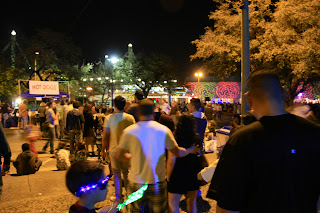 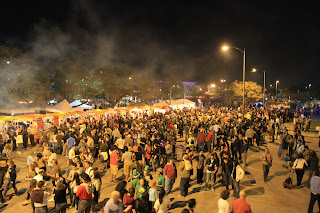 Update from The Thunderdog himself:


More details about how this came about: When I accepted the opportunity to do this event, I started digging into the details. The company my son works for
puts this event on, and last year they had 250,000 people attend. So there was no doubt about the fact that I was stepping into a fire storm.
that is when i started peppering you , Steve Schaible and Rick H at Wilderness cafe with questions.
One of the emails I got from Rick, he said he can do 600 per hour. By the time I had asked him that question, I had already figured out that I
might be able to do about 350. (remember I have no experience , so I was coming up with this by talking to you guys and spending a lot of time crunching numbers, to see the possibilities.
Experience: I have been doing large events for the last 24 years selling non-food items, I also have a friend that sells food at these events (he does over a million a year) I have used his booth as a staging point for my inventory. I sell glow in the dark novelty items as a walk around vendor, carrying my stuff into the crowds. I have to be efficient in order to make any money, so I have worked all those details out. And I have watched my friend work a crowd for 10+years.
I said all that to say that I just used some of those same deductive procedures to piece this together..

Was I scared? oh yeh.. but I love a challenge.. and this was certainly putting it all on the line.
I found favor at every turn as I prepared to do this.
I was taught early on that, if you can see the invisible, you can do the impossible. So I tore this apart from one end to the other on paper numerous times, sought advice from those that had gone before me, (you , Steve and Rick mostly), and proceeded like I had good sense.
Scuba divers are taught to ‘plan your dive and dive your plan” I had a plan on paper, we worked it and it worked.

I had a team of 4 very good people
The food items were on site in a Sysco truck (75 yards from my booth) , so I didnt have to ‘load up'
I did not have to take money and make change. It was tickets only.
I could serve no drinks
Our only job was to serve hot dogs.
I was ready with another boiler , but did not need it. The Big Dog is plenty adequate.
You saw the configuration for managing the crowd.
They gave me the space i needed to ‘spread out' so that it would work….
the crowds were there
the weather was perfect
There were 2 people on the steam table at times. 1 keeping the dogs in the water and buns in the steamer the other one putting them together. and we switched off every hour or so…
When you work it all out we did just under 300 dogs an hour. Priced at $4 and $5 for the Chicago, Frito pie $2 and Chips/bag o peanuts $2
And we NEVER got a break in the line.. not once did it slow or stop.

When Rick said he could do 600 an hour, I took that and started breaking it apart to see what it all means. I didn't doubt him, he has the experience. I don't, so I took it as inspiration. After doing this event, that number is closer to being real in my mind. And I will find a way to duplicate it if given the chance. (2 carts in one booth?)
I dont know how I could have served any more than I did. NOt without changing something, and I will find a way….

Any way, there was a lot of prep that went in to this, a lot of it was mental prep. And yes, I prayed…..a lot 🙂
I would say ‘Jump in the fire , you wont get burned. Shadrach, Meshach and Abednego didn't ”

The Cart is a tool, and is limited only to what you can conceive to do with it. I would say YES, have confidence that IT will do all you can imagine, then push the limits. Be BOLD. Shoot for the moon. If you only get to the roof, so what..that is progress… the moon will be there, go at it again.

I could go on… Just take the first 2 letters off of the word IMpossible. Take time to THINK and win….