He had just gotten started two weeks earlier. His new purchase, a big freezer to store hot dogs in was now at risk of being ruined by the rising water. In an attempt to raise the big freezer onto blocks and avoid damage, BAM… both hands smashed. Crushed! But his two broke hands didn't stop this hot dog vendors dream.

[UPDATE BELOW] – After all this… they are kicking some booty!

Four pins/rods later and two casts he was back at work. With the help of his beautiful fiancee' he collects the money while she runs cooks and serves.

Way Back In The Beginning…

Jose's desire to start a hot dog business deepened after being unemployed since June. He found a used cart and began the process of getting it ready for his inspection.

Ever since I was 15 I wanted a hot dog cart, I loved the idea of being outside making money and eating good. – Jose R. 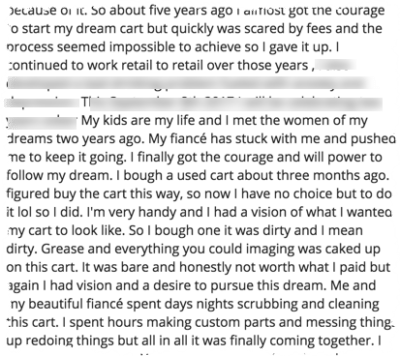 He had been working as a supervisor for a big box retailer until an injury forced him away for a month. This gave him more time to work on the used cart he'd purchased but no money to do the fix up. Ya gotta love these Catch 22 situations. [plenty of time / no money   OR  money  /and no time]

Jose and his fiancee' Kaylee scrubbed and cleaned for days and nights and because he's very handy, he began making the necessary repairs himself. Although funds were super tight and he was out of work, he joined Vendors United and began learning all he could.

I absolutely love it when those who say their serious about gaining their freedom through vending actually invest in themselves. Jose did exactly that by joining the Vendors United Street Food Pro team.

FIXING UP THE CART

After much hard work scrubbing and scraping, after fabricating required covers, after adding surround for grill, the cart went from an old has been to a sexy beast called Roc It Dogs. [click images to make larger] 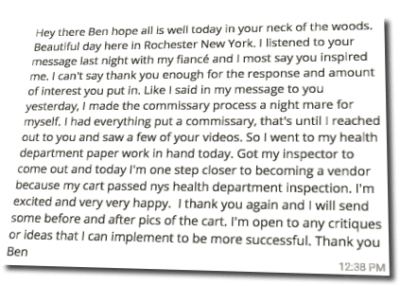 Jose learned as he continued getting the cart ready and “finally” was able to call the inspector and get his cart approved. All that hard work was now paying off. Jose could see a light at the end of the tunnel and it was certainly getting brighter.

With their children by their side, they opened and had their first day vending…

Hey Ben just wanted to tell you first day out today. 11 am to 230 pm made 110 bucks. Thanks for being an awesome person and helping others. It wasn't a easy process but it's been an amazing journey. Today made it all worth it. Thanks again Ben. Enjoy your day.

What a great feeling..

Out Of The Tunnel And Into The Light

Jose and Kaylee sent wrote me. Things were changing and changing fast! At this point, they have vended about 4 hours and have made around $250. That's just two times out. [read below]

I just love this! A desire, a plan and action and they are about to change lives. Not just for themselves and their children, but their community and the many vendors that this story will inspire.

<<<< And if you read here, you'll see their lucky butts are using my favorite hot dog!

“I been out of work since 6/18 of this year issues with my wrist. Over that time being out of work I finished up the cart as that was my life line and only hope of income. We finally got it going and completed the licensing aspects of it and on 8/2 we went live. On 8/13 I purchased a deep freezer to store my dogs meats etc. my garage floods in the rain and my freezer was sitting in the water so I went to put it on bricks to avoid any damage and bam right wrist gave out freezer slammed on both hands. Right hand was like a bomb went off inside had surgery on the 25th, I now have 4 pins in my right hand on top of a cast. The left hand also had a fracture so that's how I ended up with both hands casted. Last Thursday I had the left hand out the cast but it's been a painful experience getting it to work for me since I am right handed and have no grip strength in my left hand. But all in all Ben I've kept pushing vending has given me hope and kept me positive. My fiancé has been amazing learning the business and applying all I've learned from you to make this business work every time we go to vend. I went out yesterday to my market first time by myself and with only my left hand managed to make 200 bucks from 10-1. I can't really complain I've been blessed and I see no end in sight. I have two kids and my fiancé being the only income vending has helped us big time. Thanks for the reply it means so much.” – Jose

Stay tuned and watch as Jose & Kaylee grow their business! 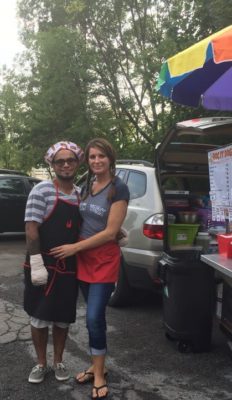 I want to thank Roc It Dogs, Kaylee and Jose, Natalie & Jose Jr.! Thank you for allowing me to share your story and your path to this point. I know that many vendors will be inspired by ya'lls tenacity and your results. Thank you, thank you. We can't wait to watch you explode this! Much love!

I WANT IN TOO!

If you are a vendor or want to become one, there isn't a better place on earth for you than Vendors United & the Street Food Pro group. Join Jose, Kaylee and other awesome vendors and learn from some of the world's best. Chat and talk with the group, get advice, share a tip… it's what we do. 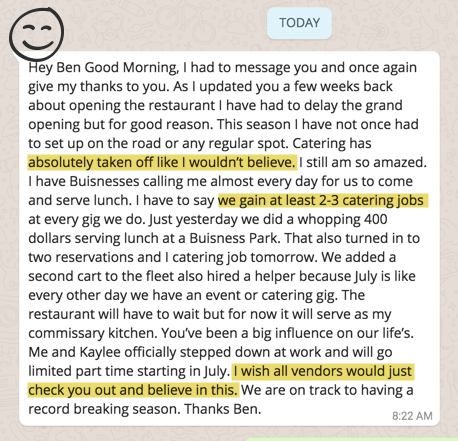 JOSE & KAYLEE (and kids) are kicking some booty! Nothing like starting off a Saturday morning with an update like this.

Catering has taken off and it's why I've been beating the catering “drums” for a few years now.

Catering has absolutely taken off like I wouldn't believe.

If you want to learn FREE – all our catering tips, tricks and more…

FREE COURSE EXPLAINS IT ALL – BUT hurry, this will be a paid course soon.

I have created a training wizard that can help you concur any part of the business you want. No matter the state you're in...no matter if you're brand new or have already gotten started.CLICK HERE TO SEE HOW THE WIZARD WILL HELP YOU [it won't hurt a bit]
Tweet
Pin
Share37
37 Shares