Jason showed up to work last year to find out that his job was being eliminated. After depleting most of the savings while trying to replace his income – Jason found me and decided to make a DIY lemon smisher smasher thingamabob. 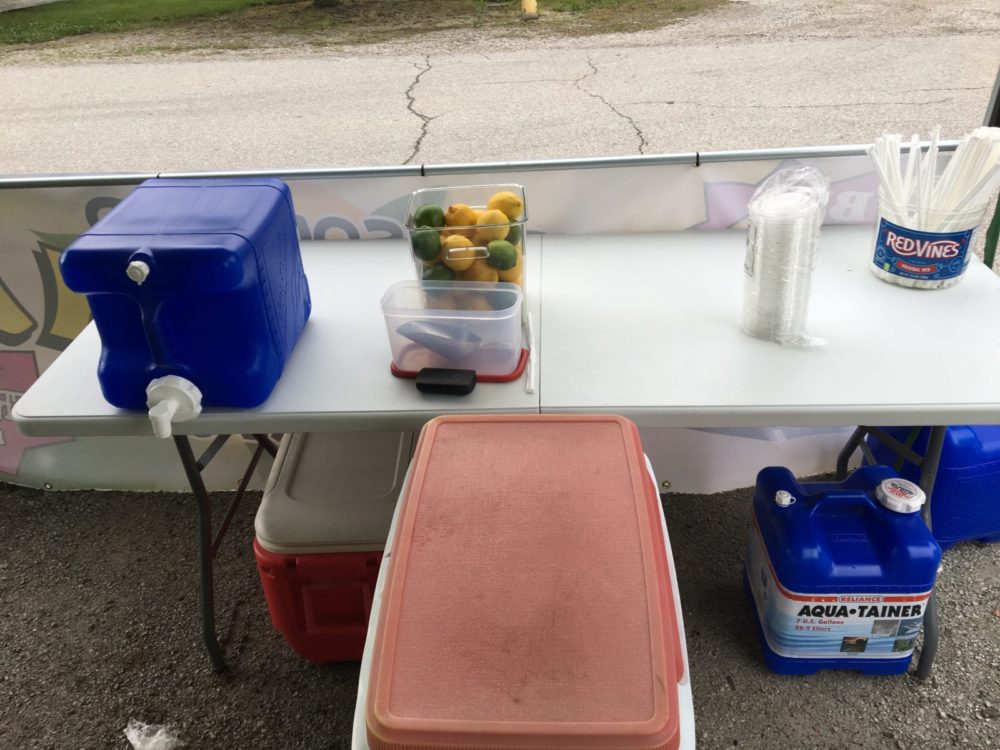 This really started about a year ago when I showed up at work (I've been an assistant pastor at a few different churches over the past 18yrs) and found out my position was being eliminated.

I literally had just put a $10k house addition on my credit card (planning on refinancing when it was done) and you can't refi without a job. I knew I wanted a break from working in a church for a little while so I started helping seniors get signed up for Medicare.

Well, that takes a couple years to get on our feet, and I was quickly burning through what savings we did have.

In the meantime, I came across a hillbilly teaching people how to sell hot dogs, and I thought, “I'd love to do that in the summers with my boys (8 & 10).

But that wasn't in the cards – YET!

Ya, so we put together a legit stand on a shoestring and diy build air powered lemon smasher and started booking events. [read: diy lemon smisher smasher thingamabob]

…my oldest son came home from school with a flyer talking about the Junior Achievement Lemonade Day. He has always wanted to have a lemonade stand but we live on a state highway. Well, if we’re going to do something we do it big.  So instead of selling 50 cent lemonade we sold $3.50 lemon shake ups, and we won the fan favorite contest! (I could tell you a story about the health dept showing up and having the cops called that day.)

After that making $200 in 3 hours, the boys were hooked and asked if we could do some more event!  Well remember I said we were burning through our savings. Ya, so we put together a legit stand on a shoestring and diy build air powered lemon smasher and started booking events.  I couldn’t have done it without the help of so many others one in particular but I won’t mention his name so he doesn’t get swamped!

You asked me to follow up with you on our first event.
We didn’t loose our shirts, but we also didn’t get our set up paid off either.  The event was probably too small (500-1000).  Rained all evening Friday and part of Saturday.  There was another vendor there doing lemonade, but we’ll get to that later.
It was a great test run for the equipment and for us learning how to run the booth.  Prorating our supplies, and not counting equipment or insurance we cleared about $200.
You’ll like this, So there were only a handful of vendors there and one of them was also doing lemonade.  But according to the reports it was “nasty”.  I even had one guy come by who was carrying two of their 24oz cups they were also selling for $5 (ours are 32), and he said “Man, I wish I would have known you were here before I bought these.”
I told him we would refill them for him and so he poured them down the storm drain next to my tent and bought two cups from me (and came back for a refill). 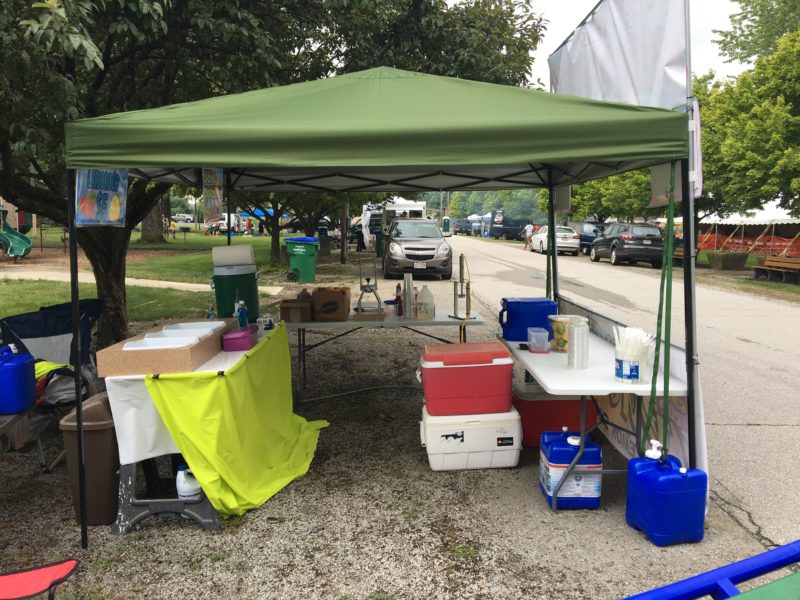 One Of the highlights of the event for me was when the woodfired pizza vendor sent down in order of cinnamon caramel bread sticks for my family to enjoy.  I think they saw my kids playing in the rain all night.  They were awesome! And so I walked down to thank them and offer them some drinks.

His day job is an engineer, so I invited him to come back and watch me make their drinks with my smasher.  During that time, he offered to make me a pizza which I took him up on,  We ended up doing some more trading the next day as well.

A funny sidenote to that story, Saturday afternoon he told me the other lemonade vendor had asked him to trade some drinks for pizza. I patted him on the shoulder and told him “good luck with that.” Later he came down and confessed that their drinks or nothing compared to ours!

A HUGE EVENT AND LESSONS LEARNED

I know  I need to do better presenting my menu as well as raise up my front table so the sample drinks can be seen.  We have an event next weekend with 30,000 anticipated attendance, and 90 degree forecast!!!! 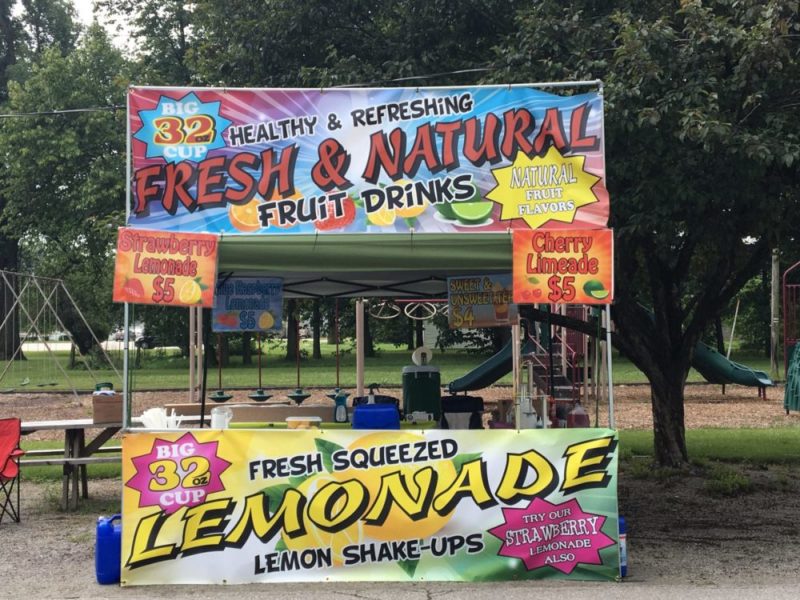 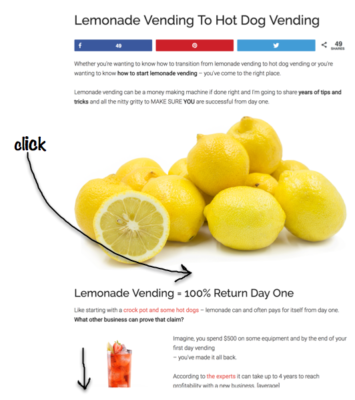 It's that time of year. The busy season. Yet many vendors from our Vendors United group are on vacation or about to leave.

How?
When you're a street food pro – you are the boss. So ask yourself: “self, can I go on vacation in the middle of the Summer?”  Why “YES!”  It makes me happy. These successful vendors, constantly learning, sharing and getting better every day. And being able to leave  (during the busy Summer season) and take a vacation with family)

Why?
Because they can. “but but but wouldn't they be smarter to wait till a slower time?” Nope. They go when they want, when the weather is best, when everything is open and whenever they please.

I've helped thousands do it and I'll help you.

Wanna be notified when AWESOME happens? Jump on now – it's absolutely free. I go live on YouTube with tips, tricks and classes and I even answer your live questions.  https://vendorsunited.org/youtube2

HEY, grab a Lemon Smasher at www.lemonsmasherstore.com, they are the best ones in the market!