This weekend I got to visit two events. The first – was a food truck gathering (video below). The second… a big festival in a small town. I watched one vendor – funnel cake vending for fast cash and lots of it.

And prior to watching the funnel cake vendor – I got to sit down with Ken Packer of Packer's Lemonade and Crazzy Dogz Catering. Lemonade is where it all started for Ken and now he has both businesses running year round.

If you've ever wanted to start vending on the cheap – have it pay for itself the first day out – then this may just be for you. Steps for starting out with lemonade vending for big money. 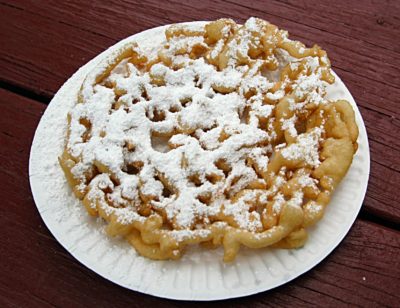 About as simple and as low cost to enter as you can get to start vending is funnel cake vending. Funnel cake making requires only 3 things:

Funnel cakes smell great as they fry up and you can offer and endless amount of toppings for even more cash. I like my funnel cakes the basic way but many can't help but add fruit fillings, candies and more.

How Much Profit Is In A Funnel Cake

Not including the equipment (see below for costs) – you can rake in the profits with funnel cakes.

Many underprice themselves or make it complicated with eleventeen different up-sells. The vendor I watched this weekend was $3.00 for small and $5.00 for large. His large was actually what the industry calls medium. 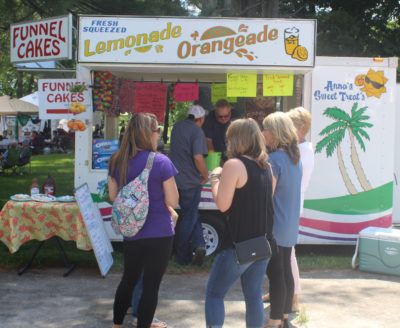 THERE ARE 3 COMMON SIZES OF FUNNEL CAKES

Your cost on any size is going to be about the same. Literally just a few pennies difference. It's why I'm using the medium size for the Costs and Profits.

You now know that the average funnel cake is netting the seller a whopping $4.50 each. I sat for nearly 2 hours in the food vendor area watching customers file in. The funnel cake vendor (by far) caught the most customers. Even if someone got bbq, they later went over and got a funnel cake. [read: desert]

Counting only his funnel cake sales, I watched him serve approximately 38 customers an hour. It requires about 3 minutes to cook a funnel cake and he was cooking in a small 2 cake vat. 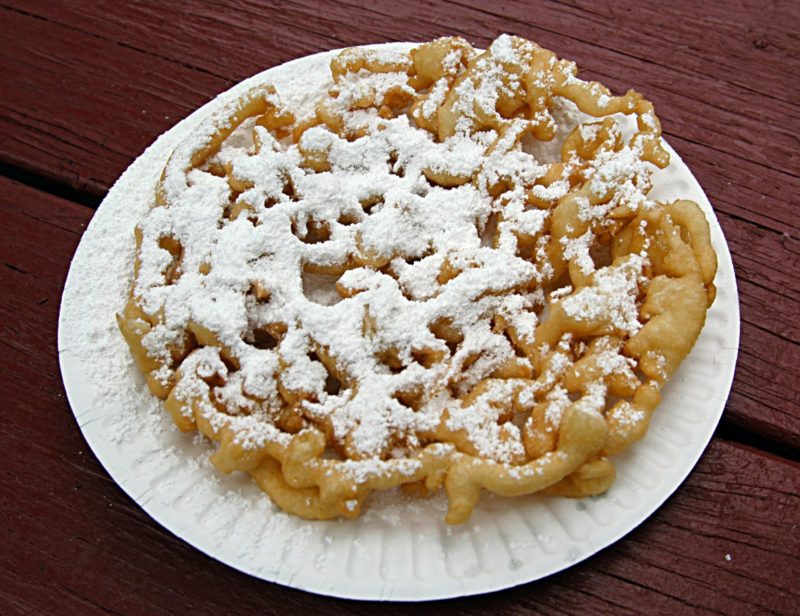 We spoke a few minutes and he said he'd been busy like that since early that morning as vendors were setting up. I learned quickly to take pre-made sausage and egg biscuits with me to the flea market when I'd set up there. Just the vendors alone guaranteed me another couple hundred bucks a day in breakfast.

This funnel cake vendor was doing the same. But with his delicious, sweet funnel cakes. Other vendors were satisfying their morning cravings with a funnel cake.

Equipment Costs To Get Started

Of course you need something to heat the grease (oil). But you can do this on a shoestring budget exactly like we did here with hot dog vending without a cart. (scroll near bottom for list and links) – In some states, you can literally start with a burner and a cast iron skillet.

All things considered though, a tabletop electric funnel cake fryer is a better option. About $400. You'll need signs and of course…

OTHER PROFITS IN FUNNEL CAKES

I'd have one size. A 6 or an 8 inch. Adding other sizes is a hassle and frankly not worth the effort. Saturday's vendor had toppings like chocolate, cinnamon and caramel. The chocolate and caramel were just the normal bottled ice cream syrup stuff. 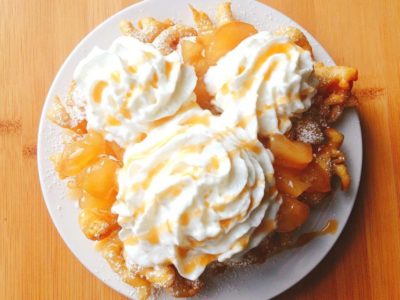 Another funnel cake vendor at the food truck rally, he had one size. He also had up-sells (add-ons) of fresh fruit toppings. These were just number 10 can pie fillings. Lemon, strawberry, peach, blueberry and another I can't remember now.

A funnel cake loaded with a fruit topping, powdered sugar and some whipped cream was $10. His cost = $1.00
So, for .50¢ more cost, he was making another $5.00 in profit over the funnel cake vendor at the other event.

Talk about leaving money on the table.

Licensing is like anything else food related. With few exceptions. Some states, like North Carolina – don't even require a license for a funnel cake vendor. Other than the typical business license.

Most states will require a food vendor license with the health department and they'll inspect your setup and advise on what can and can't be served from an open air or tent covered vendor.

The vendor pictured above – he had a 3 window trailer. With only a business license, he can vend in NC. No fire suppression needed or air handler – even though he's using oil.

In all states, if vending from an enclosed trailer, like him – you are required to have fire suppression and a fancy air handler to remove the “grease laden vapors”.  *with the exception of funnel cake vendors in North Carolina.

Every state, for one reason or another, has some loop holes for certain things. Tennessee allows a caterer to cook from their home while all other states require you use a commercially licensed kitchen. Loop holes.

NC doesn't require a caterer to have a health department permit, but it does require a licensed kitchen.

See what I mean? I'm all about funnel cake vending for fast cash!

HOW TO FIND OUT FAST 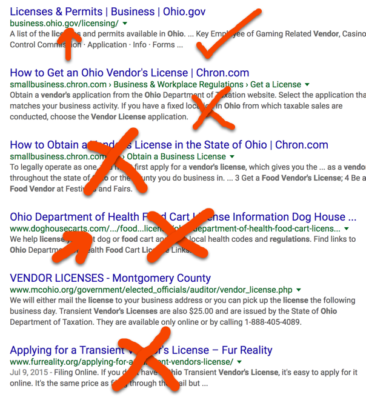 The fastest way to find out is to call the local health department. Ask for one of the restaurant inspectors and say something like…

“Hi, I'm thinking about vending funnel cakes to support my family – and would like to know the licensing requirements in (insert your state here).”

Alternatively, you can call the state. Simply google, food vendor license in (your state) and look for the web domain that ends in .gov and call them. Beware the other domains as many are sneaky ass clickbait type links.

HOW TO MAKE A FUNNEL CAKE

OHHHHH… It's real hard. Requires a bowl, the mix, some water and something to stir with. AS easy as funnel cake vending for fast cash.

Some vendors use pancake mix.. like Crusteaz brand. I prefer the real mixes which are nothing but a sweeter, fluffier version of (add water only) pancake mixes.

Another helpful piece of equipment that will save you lots of waste is a funnel cake ring. It's a stainless ring that goes in the hot oil and keeps your batter within the ring for a uniform funnel cake.

Other Ways To Start A Profitable Vending Business

Other easy startups include popcorn and snow cones but aren't nearly as successful given all data from 1000's of vendors. The above 5 – work as stand alone businesses or work well next to or with other types of food vending.

Every week I hear from vendors who make thousands over a 2 day event. I'm not talking huge events, just small hometown events and even community yard sales. One vendor does a Tractor Supply store sale every Saturday and it's his only gig.

Funnel Cake vending for fast cash is one of the top ways to break into the vending business on a shoestring budget and can usually pay for itself on the very first day. Not only is it a great snack after lunch and dinner, many funnel cake vendors have found that using the funnel cake as a bun for hot dogs, bbq and even hamburgers – super profitable.

Breakfast variations are another opportunity and is why donut shops do much better in the morning than any other time of day.

Want to literally guarantee you have access to all the pros in this business?

Want to know you can get answers fast?

Consider joining us all – over at Vendors United.

I have created a training wizard that can help you concur any part of the business you want. No matter the state you're in...no matter if you're brand new or have already gotten started.CLICK HERE TO SEE HOW THE WIZARD WILL HELP YOU [it won't hurt a bit]
Tweet
Pin4
Share59
63 Shares