Did you catch that? “go by” – the cars go by. Unless you set up a hot dog vending toll booth – then those cars… will just GO BY.

Sure, the metropolitan museum in New York would be nice – because those 24,ooo people are walking by – not driving. But for a quarter million a year (just for the permit) – it might not fit the budget just yet.

Great question! Any location that can be worked a couple days a week and provide a weeks worth of income.

Don't let this scare you though. Look at what Anne did with her little location.

Sure, the street corner will work and some vendors (many) – upon growing their following, they end up doing great no matter where they set up.

But unless that street corner has walk by traffic – then I wouldn't even consider it when starting out in the vending business.

I Was Wrong – You Can Too

I first setup in front of a tire shop. Sure there were a lot of people that came in and out, but during the hours of 11:am and 1:pm – (my hours of operation) there weren't that many.

Some did pull over from their drive and get lunch, but my main source in the beginning was the tire shop employees and customers rather than those drive by folk.

Over Time I Built That Location Into A Winner

But for many vendors – time ain't what they have. And neither did I. It was by luck – a chance encounter with a customer that opened up a winning location that I never gave up.

It was a factory.

I worked it – two days a week and from 11PM to 1AM – Yes… in the middle of the night. And that is just one of the best locations I found over the next few years.

What Are The Best Locations For Hot Dog Vending? 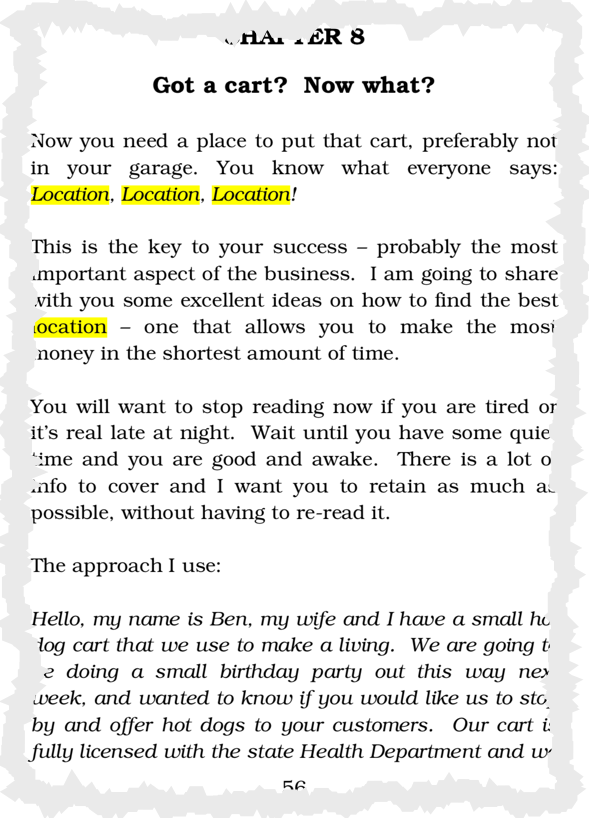 It's the out of the way, the “out of the box” types that work best. The one's that other vendors likely never consider. I wrote a list of many great locations in my course book: hot dogs saved my life

These locations work and likely better than the typical vending locations. But the fact is – that for the pro vendors, like the ones in our Vendors United group – there are much better locations that require less time and make the maximum amount of money.

And you will likely figure out many of them over the years all on your own.

But for now… the typical and more common locations besides 5th and Main are:

AND THEN THERE ARE THE BEST LOCATIONS FOR HOT DOG VENDING

If you have the time, listen to the podcast, watch the YouTube videos and search the blog for the word: location and you'll likely be able to piece together the top locations list all on your own without having to trial and error it.

If you don't have the time: SEE THIS

I have created a training wizard that can help you concur any part of the business you want. No matter the state you're in...no matter if you're brand new or have already gotten started. CLICK HERE TO SEE HOW THE WIZARD WILL HELP YOU [it won't hurt a bit]
Tweet
Pin
Share156
156 Shares